Like I said before, how can animal prints be given the boot? It is effortless, yet chic, and it gives a great platform to build upon. In transit, I spotted this adorable young lady through my uncannily freakish peripheral vision. Constantly thinking about travel, style, and comfort, she nailed it. Although everything she had on was of a slim silhouette, she was ready for a flight, meeting family, and going out with friends in the same day if she wanted to! Her pink, buttoned-up blouse underneath that leopard-print jacket was perfection for any occasion. 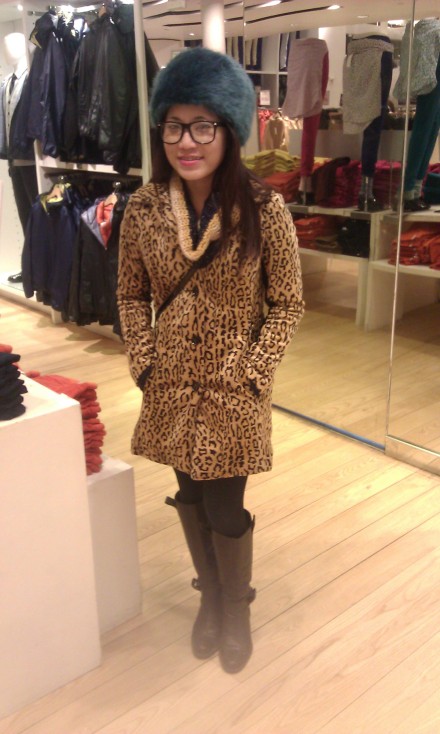 I think I heard or read somewhere recently that Kelly Osbourne declared that animal prints would be out for 2013. I respect her sensibilities in fashion, but I would have to disagree with her this time. Animal prints are classic! They are as iconic and timeless as pearls or a LBD. Dolce & Gabbana almost base their existence to their odes to the leopard print. It is their signature, season after season, year after year, popping up as minimally or as fantastically in their collections as was the signature “Valentino Red” of signore Garavani’s when he was in house. Animal prints have been consistently associated with royalty, luxury, and fashion. So how could animal prints ever be given the boot?

Excuse me, I digressed a bit too far. My initial point of this post was to articulate how animal prints are much more fun when pairing them with colors other than the usual, black, beige, or even red. Animal prints can actually be deemed a neutral background or a punch of pizzazz just as certain ingredients in food can be the main star or just an undertone of a dish. Animal prints can be paired easily with a variety of colors, and this young lady I encountered at the Uniqlo in SOHO gives us a great example. The uniquely colored ink-blue, furry hat complements and creates interest to the tone of her leopard print coat.

Most men dress out of necessity, so it’s refreshing when you spot a man who uses their senses to reflect their personality into a style they can call their own. Men need to not be so afraid of color. And at the very least, allow for some pops of color here and there so as to not be drowned out by the depths of the monotonous male palette of black, grey, navy, brown, beige, and white.

This stud I ran into at the SF Autoshow had the right idea of casual cool. The burgundy pants gave him that edge, but wasn’t overwhelming; and pairing it with a denim shirt was a perfect choice to keep the appeal masculine. Shoes do make or break the outfit, and if he’d opted to go with black shoes, this style would have been thrown out the door! Brown leather would have worked as well, but he owned it with the beige shoes. Props.

I forgot which foodie show I was watching when they proclaimed Philadelphia to be one of the revered cities to seek luxury. I am not quite so sure about luxury related to today’s standards, but this underrated city certainly became my favorite city outside of my beloved coastal cities. I easily fall in love with international cities because of their uniqueness, but with US cities, I usually find myself bored with the run-of-the-mill surroundings and conservative American food.

However, Philly brings the exuberant ideals of the “American Dream” to the forefront for any traveler to experience. Just the embedded history as the nation’s originating capital should bring in tourists even from its own backyard. Add to that, the charm of the well-preserved architecture, the culturally diversified abundance of really good food, friendly locals, and, get this, no sales tax on sartorial needs which should make this city the ultimate destination to explore within the parameters of the contiguous United States.

Alright, I will admit that although I love to glorify the fuzzy feelings of cities I have frequented, what is most important to me is the memorable food. You can take photos of everything that is stagnant and have hazy recollections whilst viewing them, but nothing spikes the memory than food which lingers in your taste buds light-years after that initial visit.

My first stop in my month-long, recurring layovers to Philadelphia was the Monk’s Cafe. With all Belgian watering holes, what is a must with the famed bier is its mussels in varying broths and chips. 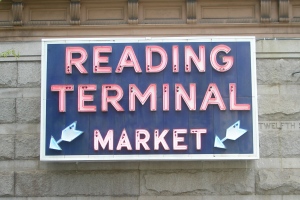 The Reading Terminal Market boasts almost everything under the sun. If I had more time, I would have visited here every single day, just to taste all of its vendors. A big part of this market was the far left side of the building dominated by the Pennsylvania Dutch, a.k.a Amish. At the mercy of the Amish were puffy and sweet baked goods, quintessential breakfast foods mostly consisting of scrapple and creamed chicken and waffles, and cheese galore. What is scrapple, you ask? I never knew until I tried it. The name is quite synonymous to what it sounds to be. It is scraps of some sort of meat; specifically pork (by the urbandictionary.com: snouts, tails, hooves, hearts, lips, ears, assholes, eyeballs, livers, spleens, and tongues) combined with cornmeal and spices cooked to a mush. WTF did I just eat? I must love Philly that much to stomach such an atrocity. Aside from my astonishing discovery, there was freshly made Indian, Thai, Southern, cookies, honey, you-name-it-you-got-it food.

During my last layover to this extraordinarily underestimated city, I incessantly announced to my crew that I craved raw oysters. My coworker was surely ambivalent as she was uncomfortable with the notion of raw shellfish especially from a non-oceanic city. Well, whatever. At least I purposefully avoided the “case of the Monday’s” associated with restaurateurs’ Chef’s Specials for week-old, land-grazing meats, and especially flesh from the sea. Surprisingly, I found that Philadelphia had the most fresh and plentiful seafood from God knows where? That Reading Terminal Market I mentioned before also had seriously crazy seafood. There were Amazonian-sized shrimp, glorious fish seemingly from around the world, and famed lobster and crab from Maine. I had my fix of oysters from the Oyster House near Rittenhouse Square. It was a buck per oyster during happy hour, so what would an oyster-fiend do? Order a dozen, just for myself. The oysters were local. I expected a murky taste as most Atlantic oysters perpetuate. However, they were neither here nor there. They were quite refreshing, yet not crisp as Pacific oysters. Interesting. I believe they were from the river. Not realizing how large American clams could grow and not knowing Americans would eat these badboys raw, I thought ordering only a half-dozen of clams would just wet the palate with itsy-bitsy clams. Gee, was I wrong. These clams were super-meaty. A bit too filling and gargantuan to me.

I did though, as my last resort to my ode to the historic Philadelphia, scarf down my last local oyster and NJ clam, and downed the inklings of the Pinot Grigio from the carafe and called it a wondrous night.

I loved running into the hip locals around the artsy downtown area of Philly filled with culture and history. Just look at this vibrant young lady’s style! From the textured pixie hair to the retroish sunglasses and belted polka-dotted dress, she epitomized the contemporary ideals of mixing and mashing old-school memories with today’s silhouettes to make her look fresh and polished. 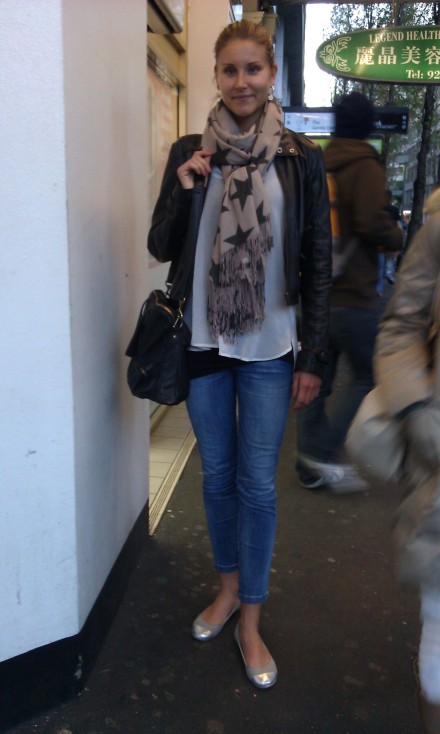 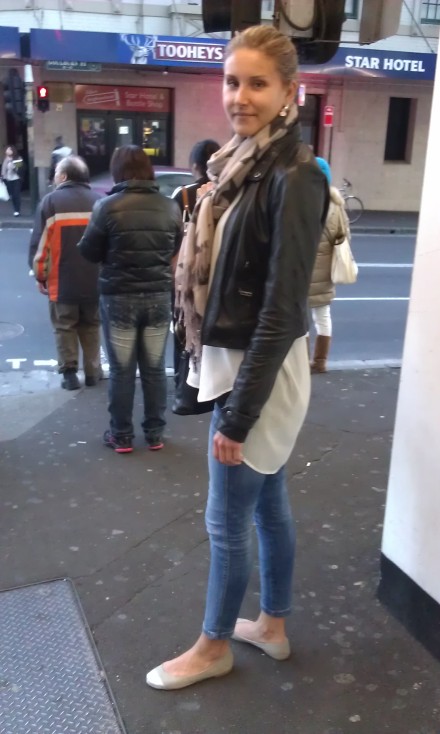 It is winter in Sydney, and as we know it in San Francisco, our summers always seem to come with a lot of winterish baggage. When temperatures should obviously be opposite from one hemisphere to the other, San Franciscans can relate to mild temperatures to our neighbors from down under during their winter months. We both usually have sunny and comfortable daytime averages of the 60’s to 70’s (in Fahrenheit) and we both have to endure the drops of temperatures as evening falls upon us.

I ran into our poster-child of the moment in Sydney who perfected the art of layering in our similar conditions. Some sort of leather (or of course faux) jacket, scarf, and jeans are our uniform in San Francisco, but she so righteously intertwined the workings of casualness with muted flats, femininity with light-colored skinny jeans and a flowing cream blouse that ends longer than the front, added edginess with a cropped leather moto-jacket, and tied the whole look together with a neutral star-printed scarf. Sans scarf and jacket, she is ready for the warmth of the day, and add these on, she is ready for chilly nights. Irreversibility is the intelligent way to dress.

This is proof that the color-blocking trend has saturated the globe and this lady hit the spot. With color-blocking, you really only need two contrasting hues or undertones to make it work. When color-blocking, keep the base colors solid and accessorize in neutral even if the neutrals have a pattern. Her solid green sheath dress coupled with her bright blue sweater works so well with her matchy-matchy bright blue Fendi purse and green platform heels and her patterned black hoisery.

Totally smart.  Smart was the encompassing word that came to my mind when I noticed Wilson Standish and his style. I am usually bored out of my mind when I am the “greeter“ of the flight repetitively welcoming the monotonous business traveler or the self-righteous yet trashy once-a-decade-traveler, but Wilson got everything right. From the most appropriate hair to the tortoise-shell eyeglasses to the neutrally colored and fitting shirt and pants, the pop of color from the socks down to the brown shoes made me purse my lips and speak like an Italian in my mind, “perfetto,” of course with the hand gestures to go a long with it. 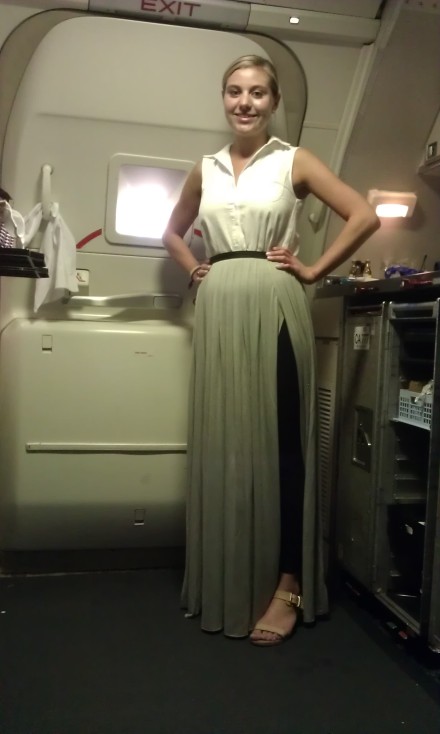 Oh, pretty, pretty Natalie! After another redundant Trans-con flight after another, I usually don’t suspect that I will lose a blog-worthy passenger in the span of a five-hour flight, but we were delayed close to four hours upon departure time and our lady captain was so gracious enough to direct our passengers to deplane the aircraft until we rectified the problem as the cabin filled with humidity and heat. I thought I lost Natalie to a later flight, but she boarded yet again as did most of our passengers. Once I saw her again, I clapped and proclaimed to my crew that she was my pretty girl in the pretty skirt.

I think everyone including our uptight purser noticed Natalie in her flowing maxi-skirt with slits paired with leggings and her sweet sleeveless blouse tucked in. It was travel perfected, beautifully.

Oh, a morning pick-me-up, or rather a burst of caffeine at any time of the day for me. I stopped drinking coffee a few years ago. I was never a fiend, but used it on those ominous days I thought I needed it, but realized it could never benefit my intestinal tract, let alone my uncontrollable circadian rhythm. (Black tea became my most sought after friend.)

But here is a product I just came upon, yet again, through my travels. TonyMoly has become a cosmetic company I favor because of their cutesy packaging a long with their products that really work.

This scrub contained in an adorable coffee mug package is thick and luscious like honey and warms up just like a latte to your face. After application and washing away the indulgent scent of coffee beans into a milky foam, the aftermath leaves your skin silky smooth, ready for the day, or night; whichever you prefer.