Casually undone yet pulled together was the look of the moment. A shirt and tie underneath a hooded sweatervest that was intentionally peaking out made for a very clever pairing for a mod business-casual look; not to mention the skinny khaki cargo pants on a man!?!?! Cargo pants are so negatively 90’s, and the recent remake for cargo pants on super leggy, young women might have only been the last resort of a reincarnation, but this take on a man proved so much more.

The dark jean with great shoes is almost all a man needs as a foundation for a cool look.

“Grand Sichuan,” is my answer when asked what I would like to do first when I get to NYC.
A fairly unrealized gem in this great city of superb dining, this is my favorite restaurant in the city and probably one of my favorite restaurants in most of the world that I have traveled to yet. There are only a handful of restaurants that have ever spiked my tastebuds to the point of exuberant literary exhilaration and this is one of them.
Commonly known as Szechuan style Chinese food in the greater part of the U.S., this Americanized version has never inflamed my senses let alone my intestines as this restaurant. “Szechuan” food has usually lead me to a disappointingly mild version and has mislead most Americans of its true Sichuan province pronunciation. Authentic Sichuan food and its spices could very well be illegal in the U.S. for its, as politely put, metabolizing properties, and impolitely put, ass-burning qualities but is the way I would particularly want to experience it outside of its unbelievably picturesque landscape of central China.
My most go-to dish is the beef tendon saturated in numbing chili sauce with spring onions although it is considered an appetizer. To me, it is my kimchi dish where it pairs well with any other entree throughout the whole meal, or could be consumed just by itself with rice.

Another dish that is unforgettable is the soft-shell crab with peppers and celery. The celery complements the spices like an obsessive, opposite attraction. This is my most favorite way to enjoy soft-shell crab.

An unfamiliar dish, and a very addictive one that I was introduced to this time was beef literally swimming in the famed sichuan chili-oil but was ridiculously taken up fifty or more notches with almost a quarter cup of black pepper that circled around the casserole-like dish. I can do most chili-oil based dishes without enormous amounts of white rice on the side, but I had to try and avoid the black pepper just so I could enjoy the dish without coughing. The black pepper seemed to be an aesthetic proposition from the chef, or a test to prove how much spiciness you could consume. It was grand in spite of the black peppering. 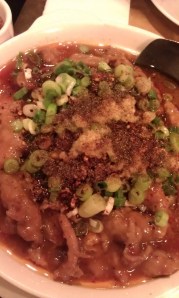