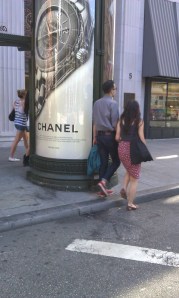 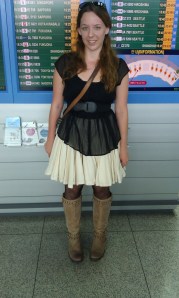 I agreed to go with my niece and nephew to their church in Seoul. It was kind of eye-awakening and liberating that these seemingly conservatives came just how they were. I saw some hipsters and even some punk-rockers on a Sunday, but they were all too shy for me to photograph. As I was leaving Seoul, I thought the best people to photograph would be the non-Koreans. When I tapped Holland’s shoulder, I thought she was Japanese by her dress and her light-brown hair color. She was in fact a foreign student from California on her way to Sapporo. Her cute style matched her cute personality. Maybe I was drawn to her style because it somewhat reminded me of my own style; not too vomiting-ish femininity coupled with sexy solids in different textures. 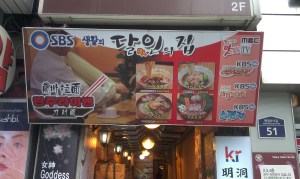 I have a love/hate relationship with Seoul as I do with many things in my life such as the men that I date but the sentiment is more like the feelings I have with New York City. The blisteringly cold winters and the sticky hot summers make me never want to actually partake in their kind of life no matter how grand the city may be. Plus, if I lived in Seoul, I certainly couldn’t maintain my 112lb. frame (which is considered voluptuous?!?! by Seoul standards) I’ve carried since the end of high school up until now. The only thing that is reasonably cheap in Seoul is the delectable food and the not so delicious, paralyzing hangovers.

Talking about food, the main reason why I love and visit Seoul, I always discover new eats, something more addictive than before that makes me dream of it and pine over it until I get another fix of it. I think these food infatuations are worse than any infatuation I have had for a man because with the food in Seoul, I lust over it for a lifetime and grieve over it like a knife to my heart if I can never have it again. 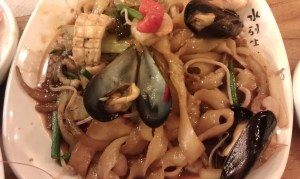 This time around, I found a new undying love for a Korean-Chinese restaurant I fell upon after feet-hurting, shoulder-hurting, psychologically-draining shopping. Korean-Chinese food is a dime a dozen in Korea and is the most delivered food like mediocre pizza delivery in the U.S. This type of food, don’t quote me on this, was created by Chinese immigrants who needed to make a living in Korea. Mainly, these dishes are jjajjangmyun and jjambbong. Anyhow, so much about the historical details, these noodle dishes made me hurt with love. The moment I took a bite, I wished, I kind of dreamt that I was Anthony Bourdain with a camera following my every facial expression, comment, and invocation. I wanted to be so educated in food like him that I could be cool enough to curse my words of delight. I cursed in my head and verbally instead, summoned the owner and told him that this was “unbelievable” and that this was the “best meal I have ever had in my life compared to even the priciest meals I have had.” 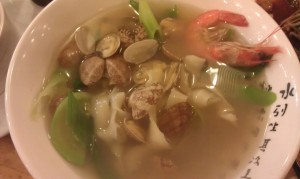 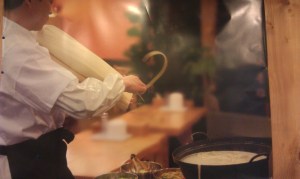 The images you see above is what I ordered. I had the stir-fried seafood noodles (superb) and the ultra-Korean dish, kalgooksu (the broth, noodles, and the amount of clams were amazing). Next time, I’m going to order the whole menu just for myself, just out of gluttony because I don’t want to look over my shoulder and become jealous of what my neighbors ordered. I think it’s totally worth it.
Go there. Rahnjoo kahlmyun.
1F, 25-9, Chungmuro-1ga, joong-ku, Seoul.
Phone: 02.779.4800