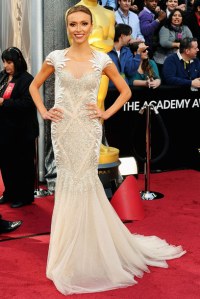 Anticipating many more striking colors as the color-blocking trend has become more prominent, shades of white, instead, dominated the red carpet at the Oscar’s tonight. Giuliana’s dress was so interesting and beautiful, but her hair could have been coiffed differently to suit the style and enhance her features. 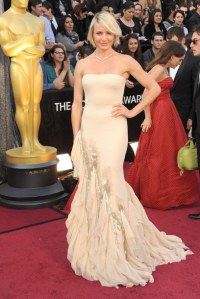 Quite elegant but a bit safe, especially with the color and the silhouette, but it does show off Cameron’s usual, incredible physique. 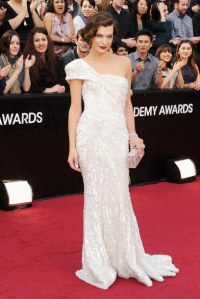 Milla was decked out in old Hollywood glamour in this Elie Saab dress with her scarlet red lips and hair that was true-to-style with side-swept waves. 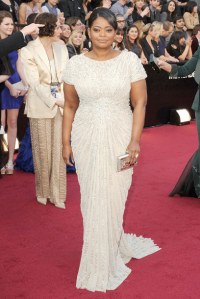 Octavia looked stunning in this well-proportioned and well-balanced Tadashi dress with its drapes channeled through the midsection flaring out to show off her lovely curves. The silhouette perfectly elongated her petite stature. 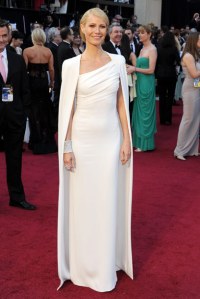 Certainly sleek through and through. A very simplified silhouette gave Gwyneth the look of a chic goddess with her sleek faux pixie-bob, minimal choice of accessories, the long and lean lines of the dress, and of course that interestingly attached cape. 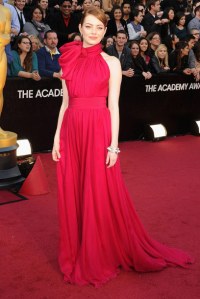 Here’s that punch of color most in-the-know of trends awaited. Although not unusual for wearing red on the red carpet, Emma’s dress was exquisite with its lengthy drape and tapered waist. The loosely tied bow around her neck gave her an all-around feminine appeal reminiscent but quite different from all of the red dresses Heidi Klum has worn to award shows. 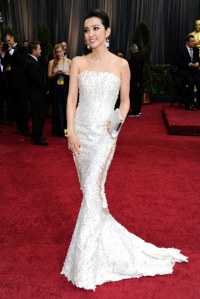 A fresh new face debuting on Oscar’s red carpet, Bingbing Li is an actress from China who will appear alongside this list’s other best-dressed leading lady, Milla Jovovich in Resident Evil: Retribution in theaters September 14, 2012. The overall details and the peekaboo cut-outs along the sides of the legs with a sweet train whispered love. Someone please reveal who the designer Bingbing was wearing! 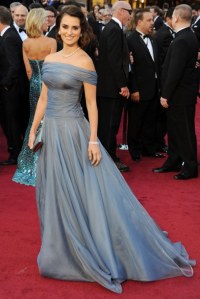 Penelope, oh Penelope, fairest of them all. She is always astonishingly immaculate as an immortal divinity. She glided on the red carpet in this delicate, pewter colored Armani Prive dress. 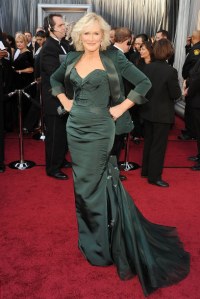 Here was the seductress of the night. What a winning combination of structure and hourglass shape with a perfectly fitting, tailored tuxedo jacket over a curvaceous dress with draped train. 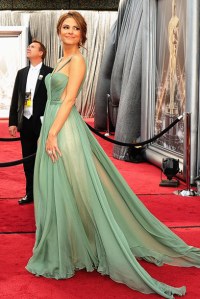 This flawless and flowing, minty green, sheer-skirted chiffon gown by a rather unknown designer, deemed worthy to be my “number one” in this year’s Oscar lineup of the stars. Although not a silver screen actress, Maria epitomized elegance, sophistication, glamour, femininity, and class just like an A-lister icon such as Angelina Jolie or even Elizabeth Taylor in her heyday.