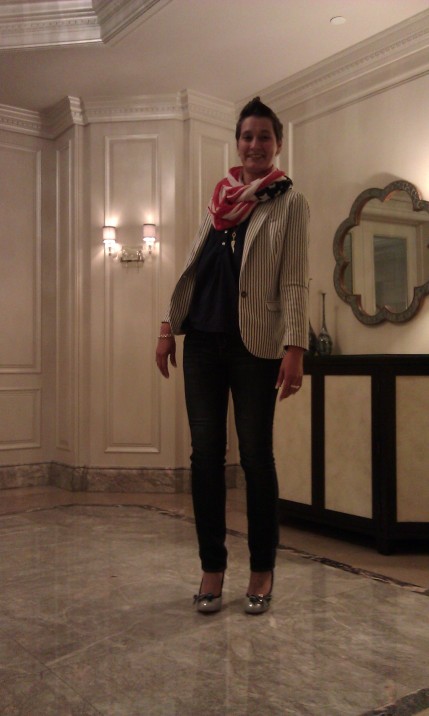 I met her in San Francisco at the Ritz Carlton last week. The dominating trend to mix feminine and masculine points to look so fresh and in-the-now is what caught my eye with this lady from Germany. That masculine striped blazer with feminine pumps with stripes and bows made for great interest and contrast as she tied the look off with an American flag scarf. Or is that really a flag she made into a scarf? I think she might be starting a new trend. I need to find or make myself a flag scarf in countries that I love.

This is proof that the color-blocking trend has saturated the globe and this lady hit the spot. With color-blocking, you really only need two contrasting hues or undertones to make it work. When color-blocking, keep the base colors solid and accessorize in neutral even if the neutrals have a pattern. Her solid green sheath dress coupled with her bright blue sweater works so well with her matchy-matchy bright blue Fendi purse and green platform heels and her patterned black hoisery.

Totally smart.  Smart was the encompassing word that came to my mind when I noticed Wilson Standish and his style. I am usually bored out of my mind when I am the “greeter“ of the flight repetitively welcoming the monotonous business traveler or the self-righteous yet trashy once-a-decade-traveler, but Wilson got everything right. From the most appropriate hair to the tortoise-shell eyeglasses to the neutrally colored and fitting shirt and pants, the pop of color from the socks down to the brown shoes made me purse my lips and speak like an Italian in my mind, “perfetto,” of course with the hand gestures to go a long with it.

Oh, pretty, pretty Natalie! After another redundant Trans-con flight after another, I usually don’t suspect that I will lose a blog-worthy passenger in the span of a five-hour flight, but we were delayed close to four hours upon departure time and our lady captain was so gracious enough to direct our passengers to deplane the aircraft until we rectified the problem as the cabin filled with humidity and heat. I thought I lost Natalie to a later flight, but she boarded yet again as did most of our passengers. Once I saw her again, I clapped and proclaimed to my crew that she was my pretty girl in the pretty skirt.

I think everyone including our uptight purser noticed Natalie in her flowing maxi-skirt with slits paired with leggings and her sweet sleeveless blouse tucked in. It was travel perfected, beautifully.

It all started in Germany by Dr. Schrammek for her patients who underwent chemical peels and laser resurfacing to soothe the skin and minimize redness. It was called, “Blemish Balm,” now known as “BB Cream.” This little tube caught wind in Asia and from then on, various recreations caused the largest sensation in Asian cosmetic history, especially in Korea. My stewardess girlfriend at Korean Air introduced me to the original Blemish Balm more than a few years ago telling me that flight attendants have been using it as a makeup base to prolong their makeup across time zones.

The original formula felt very water-based as it needed a lot of warmth in the fingertips to spread evenly, and it rendered some getting use to, but after a few applications, I used it religiously as it paired so well with Bare Escentuals mineral makeup or by using it alone just with a setting powder. After a year or so of searching for it in German pharmacies and in specialized cosmetic stores around the world, I fell upon Korean BB Creams during my many travels to Seoul.

At that point in time, I was bombarded with a plethora of different BB Creams from high-end to low-end cosmetic companies marketing their new revelation in makeup. Most of these companies offered UV protection, something that was never introduced in the original Blemish Balm. But what really caused the cult following of BB Creams in Asia was that it was not a thick, pore-blocking foundation as it acted partially as a primer, sunscreen, and tinted moisturizer with the benefits of targeted skin problems such as acne for oily skin, rosacea, and even fine lines and wrinkles for more mature skin and dry skin. The sensation even crossed boundaries within genders as it became part of the skincare regimen with teenage males who were insecure about their hormonal and unpredictable skin.

My favorite BB Cream I encountered was from a fluke of circumstances from my mother’s cosmetic bag. Her Hanyul BB Cream made by Amore Pacific (the most luxurious and sought after Asian cosmetic company to hit the counters of Sephora and Neiman Marcus) fit me nicely! The only reason my mother forked it over to me was because it did not match her skin tone. It is actually made for dry/mature skin but the coverage is impeccable alone and balanced my oil-proned/combination skin. I think this product reaped many more benefits than Chanel’s Mat Lumiere Makeup with SPF 15 which I truly believed in, but realized that it sucked the life out of my skin of its essential nutrients.

About less than a year ago, I was intrigued by Clinque’s BB Cream that was first introduced to the US. As a beauty addict gullible of packaging claims, of course I had to try it to see if it met the standards of what I have been using. It failed in many ways. It claims to be an anti-aging solution with its SPF 30 and that it is suitable for all skin types with its oil-free formula, but I could not contest its benefits as advertised. Yes, it might have SPF 30 content, but I could find that in many sunscreens and even moisturizers. The disappointing caveat was that it caked upon application no matter how light or how heavy my hand was. I thought with regular use, my skin would adapt to its claims. It didn’t. It did not fair well as a primer nor tinted moisturizer. 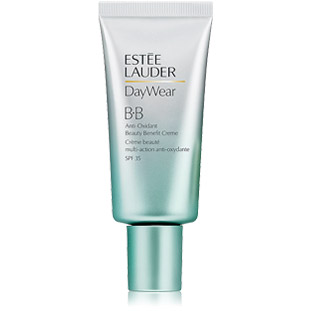 Recently with my travels and frequenting Duty Free shops, I discovered that Estee Lauder and Dior have come up with their own formulations of BB Creams. I wondered about how they would advertise in the US market in magazines and ad campaigns as most Americans have not been exposed to BB Creams, its origination, and let alone, its acronym. With my respect and experience towards these true-to-claim companies, I think they will come up on top in competition. I cannot wait to compare their differences.

It was actually a bit difficult to differentiate between who owned which line of the Academy of Art University runway show until the clean and obvious mid-break of Jeanette Au’s visually impressive Fall 2012 ready-to-wear collection. The similarities in construction, color choices, and the run-on selection of hair, makeup, and music, made for an almost continuous stream of the possibility of one designer’s collection.

The recent 2012 Mercedes Benz Fashion Week honorably showcased Academy of Art University’s student works. Out of the nine students, Jeanette Au was the winning star with her impeccably tailored and detailed collection. She approached suiting with tasteful gradation of colors and textures throughout her ensembles and proved innovative thinking with a superb technique of knotted or twisted embellishments on the shoulders, closures, and sides of her jackets for a truly individualized and memorable style.

Most of the other students were on par with the engineering of their garments, but Au proved to be the pioneer of the show revealing her strategic three-dimensional adornments compared to the flat, monochromatic, and minimalistic styles of her counterparts.